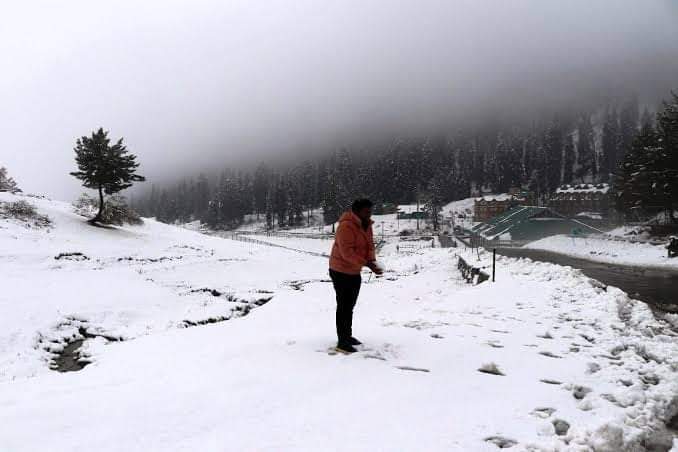 Higher reaches of Gulmarg including the Affarwat peaks have witnessed a mild snowfall on Thursday, reports reaching here said.

The sudden drop in temperatures in the plains of the valley is the outcome of the freeze that took off from the Gulmarg peaks. Reports said the snowfall was mild and for a very brief time. Some people who had gone to cerebrate Eid in the area covered snowfall live on their camera and broadcast it through social media.

Gulmarg witnessed a similar snowfall in its upper reaches early May.

Kashmir is witnessing freak weather for the last few weeks. Most of the month of fasting was actually devoured by the low temperature days. The temperatures soared in the last 10 days of Ramzan but as the festival approaches, it started raining heavily.

The frequent rains have started impacting the agriculture. Most of the South Kashmir is still in its woolens and the Kangri is still in use. Though the temperature is ideal for tourists from the mainland which is literally burning in scorching heat, the footfalls are termed to be unimpressive.

The prevailing weather conditions are expected to continue for next 24 hours. Sky shall remain partly cloudy till June 9.It will be sunny on June 10, and a day later rains will resume.